On its website, WTVQ-TV Lexington, KY (5/23, Runyon), an ABC affiliate, reported, “The National Eye Institute estimates about 14,000 to 16,000 infants are born with” retinopathy of prematurity (ROP) each year. “In severe cases, retinal detachment can cause significant vision impairment or blindness.” Sadly, “each year, up to 1,500 infants require medical treatment for ROP and 600 become legally blind from the condition.”

From Wikipedia, the free encyclopedia

Retinopathy of prematurity (ROP), previously known as retrolental fibroplasia (RLF), is an eye disease that affects prematurely born babies. It is thought to be caused by disorganized growth of retinal blood vesselswhich may result in scarring and retinal detachment. ROP can be mild and may resolve spontaneously, but may lead to blindness in serious cases. As such, all preterm babies are at risk for ROP, and very low birth weight is an additional risk factor. Both oxygen toxicity and relative hypoxia can contribute to the development of ROP.

Normally, maturation of the retina proceeds in-utero, and at term the mature infant has fully vascularized retina. However, in preterm infants, the retina is often not fully vascularized. ROP occurs when the development of the retinal vasculature is arrested and then proceeds abnormally. The key disease element is fibrovascular proliferation. This is growth of abnormal new vessels that may regress, but frequently progresses. Associated with the growth of these new vessels is fibrous tissue (scar tissue) that may contract to cause retinal detachment. Multiple factors can determine whether the disease progresses, including overall health, birth weight, the stage of ROP at initial diagnosis, and the presence or absence of “plus disease”. Supplemental oxygen exposure, while a risk factor, is not the main risk factor for development of this disease. Restricting supplemental oxygen use does not necessarily reduce the rate of ROP, and may raise the risk of other hypoxia-related systemic complications.

Patients with ROP are at greater risk for strabismus, glaucoma, cataracts and myopia later in life, and should be examined yearly to help prevent and treat these conditions.

Following pupillary dilation using eye drops, the retina is examined using a special lighted instrument (an indirect ophthalmoscope). The peripheral portions of the retina are sometimes pushed into view using scleral depression. Examination of the retina of a premature infant is performed to determine how far the retinal blood vessels have grown (the zone), and whether or not the vessels are growing flat along the wall of the eye (the stage). Once the vessels have grown into Zone 3 (see below) it is usually safe to discharge the child from further screening for ROP. The stage of ROP refers to the character of the leading edge of growing retinal blood vessels (at the vascular-avascular border). The stages of ROP disease have been defined by the International Classification of Retinopathy of Prematurity (ICROP).

Retinal examination with scleral depression is generally recommended for patients born before 30–32 weeks gestation, with birthweight 1500 grams or less, or at the discretion of the treating neonatologist. The initial examination is usually performed at 4–6 weeks of life, and then repeated every 1–3 weeks until vascularization is complete (or until disease progression mandates treatment).

In older patients the appearance of the disease is less well described but includes the residua of the ICROP stages as well as secondary retinal responses.

The most difficult aspect of the differential diagnosis may arise from the similarity of two other diseases:

The system used for describing the findings of active ROP is entitled The International Classification of Retinopathy of Prematurity (ICROP).[1] ICROP uses a number of parameters to describe the disease. They are location of the disease into zones (1, 2, and 3), the circumferential extent of the disease based on the clock hours (1-12), the severity of the disease (stage 1-5) and the presence or absence of “Plus Disease”. Each aspect of the classification has a technical definition. This classification was used for the major clinical trials. It has been revised in 2005[2]

Zones of the retina in ROP

The circumferential extent of the disease is described in segments as if the top of the eye were 12 on the face of a clock. For example one might report that there is stage 1 disease for 3 clock hours from 4 to 7 o’clock. (The extent is a bit less important since the treatment indications from the Early Treatment for ROP[3])

The Stages describe the ophthalmoscopic findings at the junction between the vascularized and avascular retina.

In addition, Plus disease may be present at any stage. It describes a significant level of vascular dilation and tortuosity observed at the posterior retinal vessels. This reflects the increase of blood flow through the retina. [1]

Stages 1 and 2 do not lead to blindness. However, they can progress to the more severe stages. Threshold disease is defined as disease that has a 50% likelihood of progressing to retinal detachment. Threshold disease is considered to be present when stage 3 ROP is present in either zone I or zone II, with at least 5 continuous or 8 total clock hours of disease, and the presence of plus disease.[4] Progression to stage 4 (partial retinal detachment), or to stage 5 (total retinal detachment), will result in substantial or total loss of vision for the infant.

In order to allow timely intervention, a system of monitoring is undertaken for infants at risk of developing ROP. These monitoring protocols differ geographically because the definition of high-risk is not uniform or perfectly defined. In the USA the consensus statement of experts is informed by data derived by clinical trials and published in Pediatrics 2006. They included infants with birthweights under 1500 grams or under 30 weeks gestation in most cases. 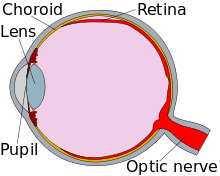 The retina (red) is detached at the top of the eye. 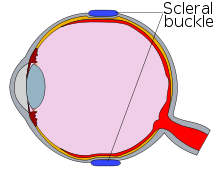 The silicone band (scleral buckle, blue) is placed around the eye. This brings the wall of the eye into contact with the detached retina, allowing the retina to re-attach.

In a recent clinical trial comparing bevacizumab with conventional laser therapy, intravitreal bevacizumab monotherapy showed a significant benefit for zone I but not zone II disease when used to treat infants with stage 3+ retinopathy of prematurity. (New England Journal of Medicine 2011 364(7):603-615)

A significant time in the history of the disease was between 1941–1953, when a worldwide epidemic of ROP was seen. Over 12,000 babies worldwide were not only born with the disease but blinded by it. Soul musician Stevie Wonder, actor Tom Sullivan as well as jazz singer Diane Schuur are a few famous people who have the disease.

The first case of the epidemic was seen on St. Valentine’s Day in 1941, when a premature baby in Boston was diagnosed. Cases were then seen all over the world and the cause was, at that point, unknown. By 1951 a clear link between incidence and affluence became clear: many cases were seen in developed countries with organized and well-funded health care. Two British scientists suggested that it was oxygen toxicity that caused the disease. Babies born prematurely in such affluent areas were treated in incubators which had artificially high levels of oxygen. Studies on rats made this cause seem more likely, but the link was eventually confirmed by a controversial study undertaken by American pediatricians. The study involved two groups of babies. Some were given the usual oxygen concentrations in their incubators, while the other group had “curtailed” oxygen levels. The latter group was shown to have a lower incidence of the disease. As a result, oxygen levels in incubators were lowered and consequently the epidemic was halted.[6]